The Squaw Valley Olympic Flame Will Burn in Beijing 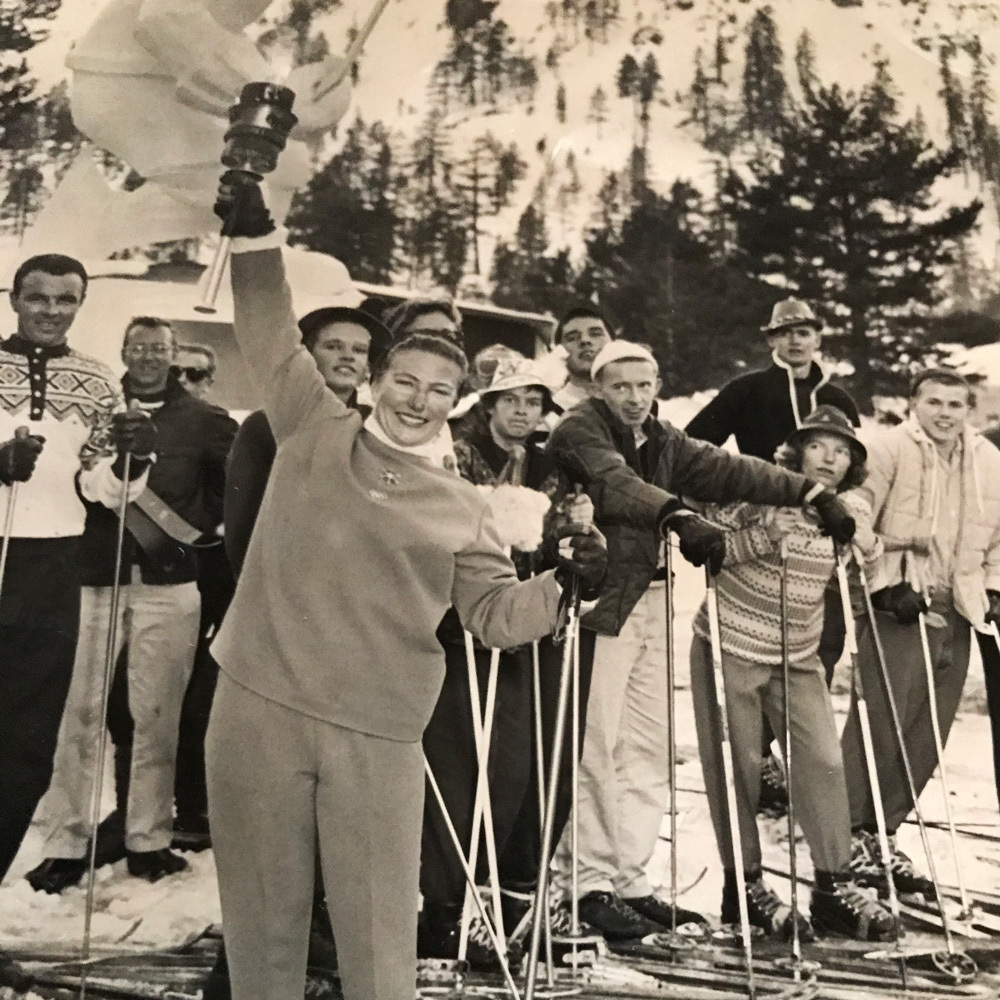 In 1960, SNOW Sports Museum Athlete Ambassador, Starr Walton-Hurley, was one of the Olympic Torch bearers at the Winter Games in Squaw Valley. In fact, she carried the torch through the valley to Blythe Arena, where she passed it along to the Olympic officials.

“It was a thrill of a lifetime,” says Walton-Hurley, “and the start of my journey to be an Olympian in 1964.” She went on to compete for the U.S. team at the 1964 Winter Games in Innsbruck, Austria, where she finished 14th in the women’s downhill. (And she still rips today!)

This is Walton-Hurley’s story, as reported by the Donner Summit Historical Society:

“When I was selected to carry the 1960 Winter Olympic Torch into Squaw Valley the day before the Olympics were to open, I was thrilled. My good friend Babette Haueisen was going to pass it to me at the parking lot leading to the Olympic Stadium. We had had very little snow in February and the way to the stadium was with straw and snow. Babette arrived using barrel staves for skis and with the Torch and a small following. She handed me the Torch and I slid across the parking lot, Torch held high, to the Olympic Stadium where the Sacramento Bee photographer shot a photo that declared ‘The Olympic Torch has arrived!’

I was 18 at the time and a top Junior racer in Far West. The relay involved some 600 people starting in Los Angeles and down the summit, along old 40 to 89 and into Squaw Valley. My mother arranged for a good friend, Jack Samples, to find a blue ski suit for me to wear. There was very little fanfare or people at the event. The next day the Torch was taken by Andrea Mead Lawrence to the stadium and handed the torch to skater Kenneth Charles Henry who did a lap around the stadium before lighting the cauldron from which the Olympic Flames would burn throughout the Games.”

For a very thorough and detailed history (and some great photographs) of the 1960 torch relay through California, go to page 10 of the Donner Summit Historical Society’s monthly newsletter:

Read More Here
The VIII Olympic Winter Games Organizing Committee officials forgot to coordinate in advance for the lighting of the flame in Greece. The Greek Olympic Committee refused to light the flame claiming it was too late to organize the ceremony and the sun was too low anyway. (Sunlight is concentrated to ignite the flame at the altar on Mt. Olympia.) Instead, they lit the flame in the hearth of the home of Sondre Nordheim in Telemark, Norway. Nordheim is recognized as the father of modern skiing. The flame was flown to Los Angeles where it ignited the flame cauldron in 1932 Summer Olympics Coliseum. From there, it was carried by a relay of running torch bearers to Olympic Valley and that same flame will be used to light the torch for the Beijing 2022 Olympic Games in China.

How cool is that?

As part of our 2021 goals, we will be increasing our communication to everyone as we have more stories to share and projects in the works. Please follow us on Facebook and Instagram to see our weekly posts about iconic Tahoe athletes and the historical artifacts we have collected for the museum.

Thank you from the SNOW Sports Museum Team!

The SNOW Sports Museum (dba SVSMF) is a 501(c)(3) not-for-profit organization. The foundation mission and objectives are to build a world class museum to offer cultural, historical and educational opportunities for people of all ages and abilities, especially youth. All purchases and donations support these efforts. Rights Reserved, SVSMF.