The “Miracle of Squaw Valley” – The Olympics Hires Walt Disney 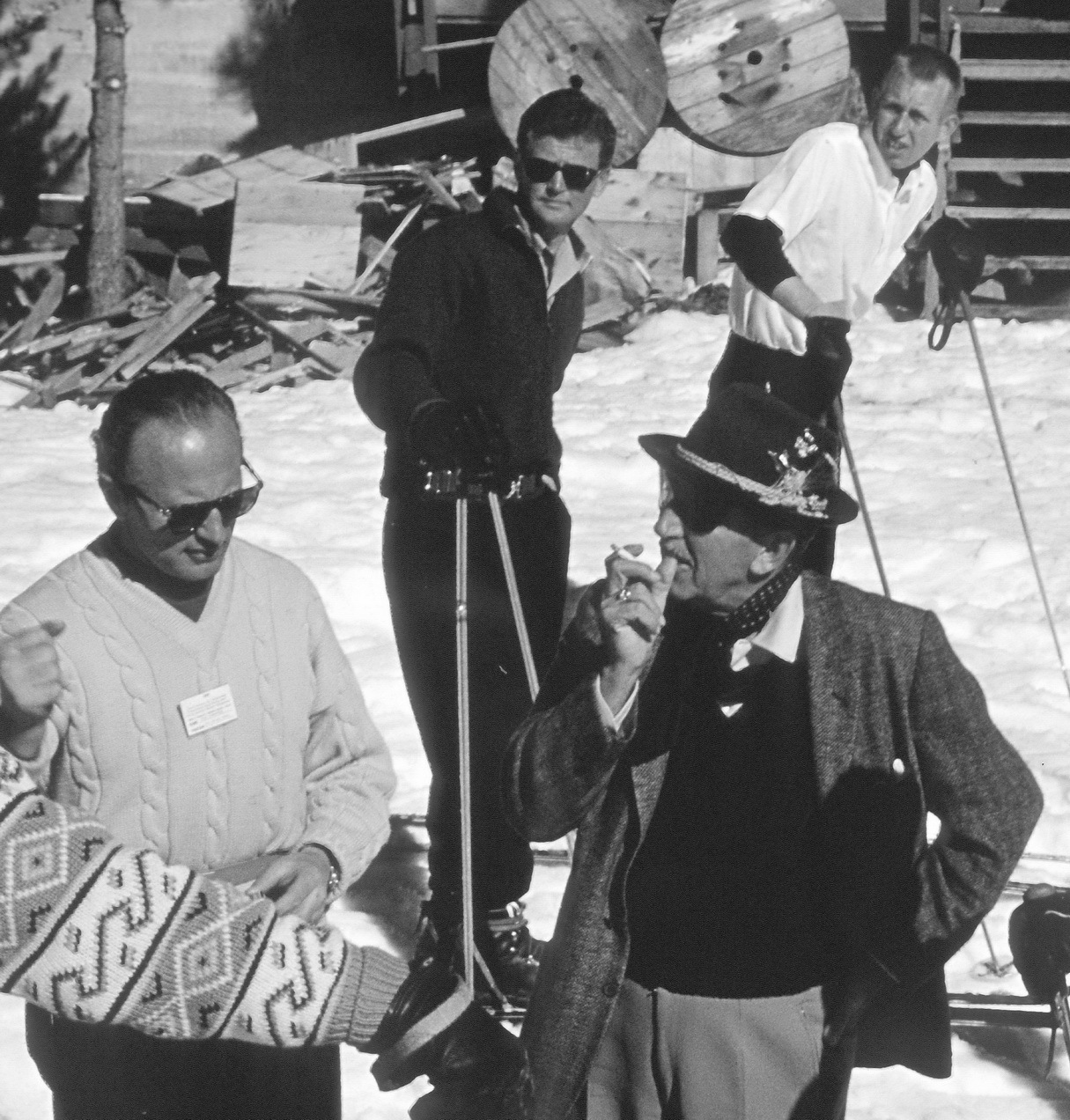 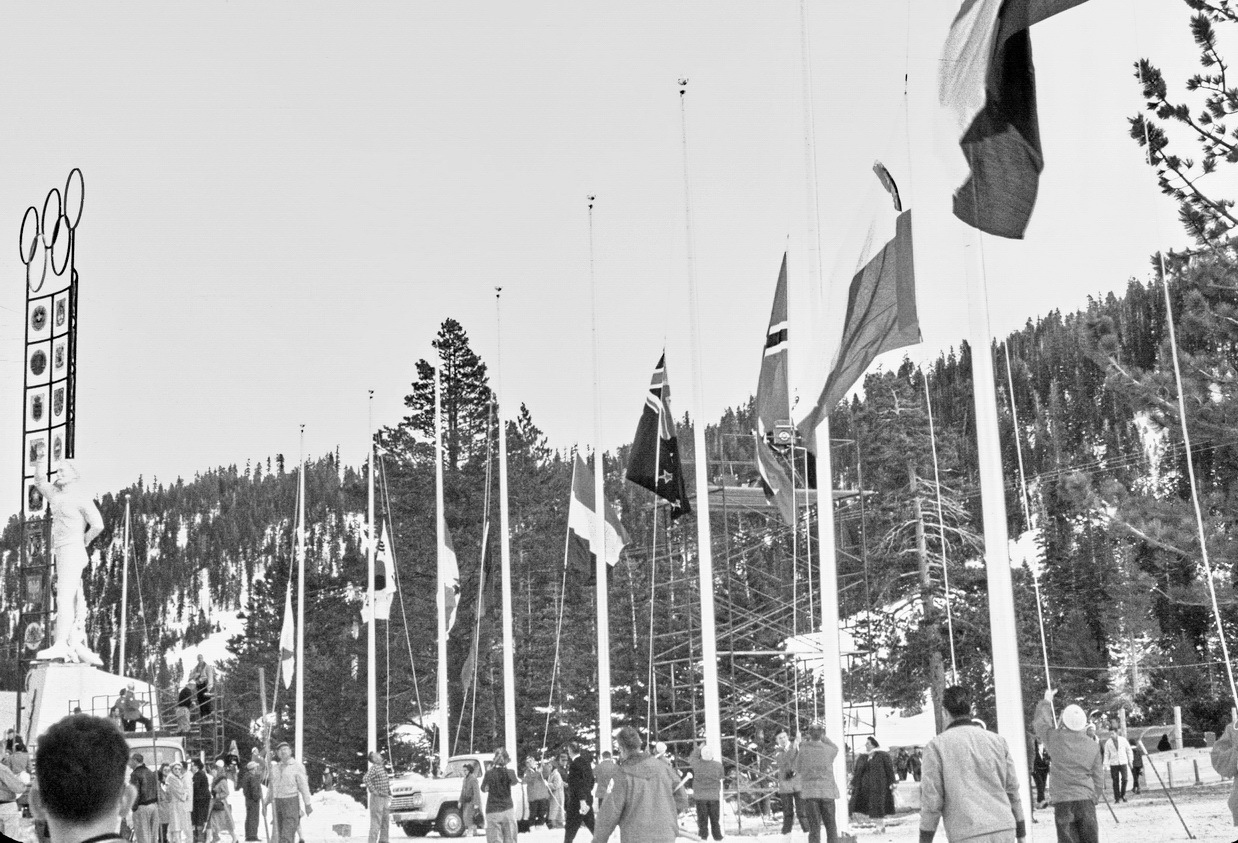 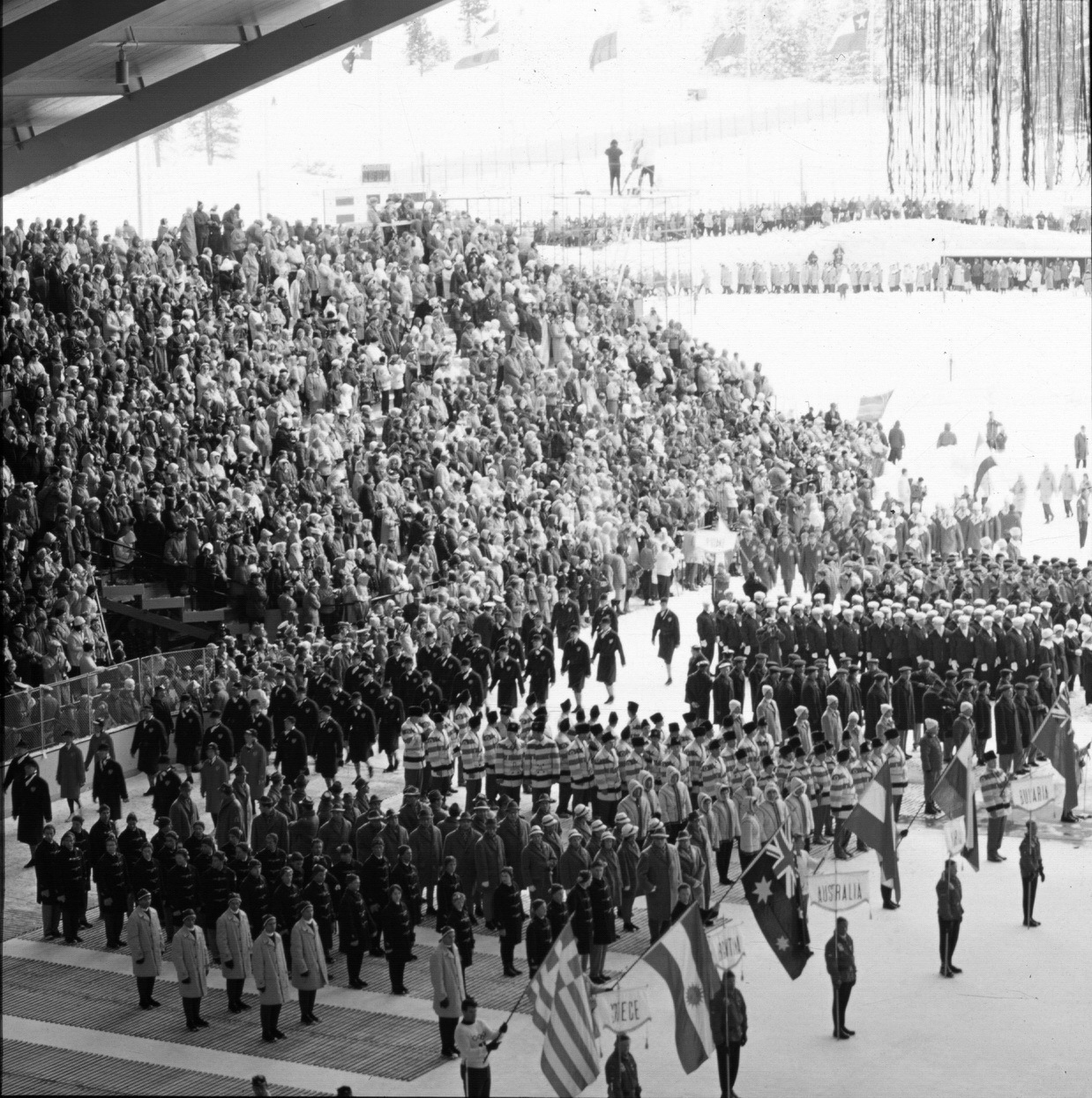 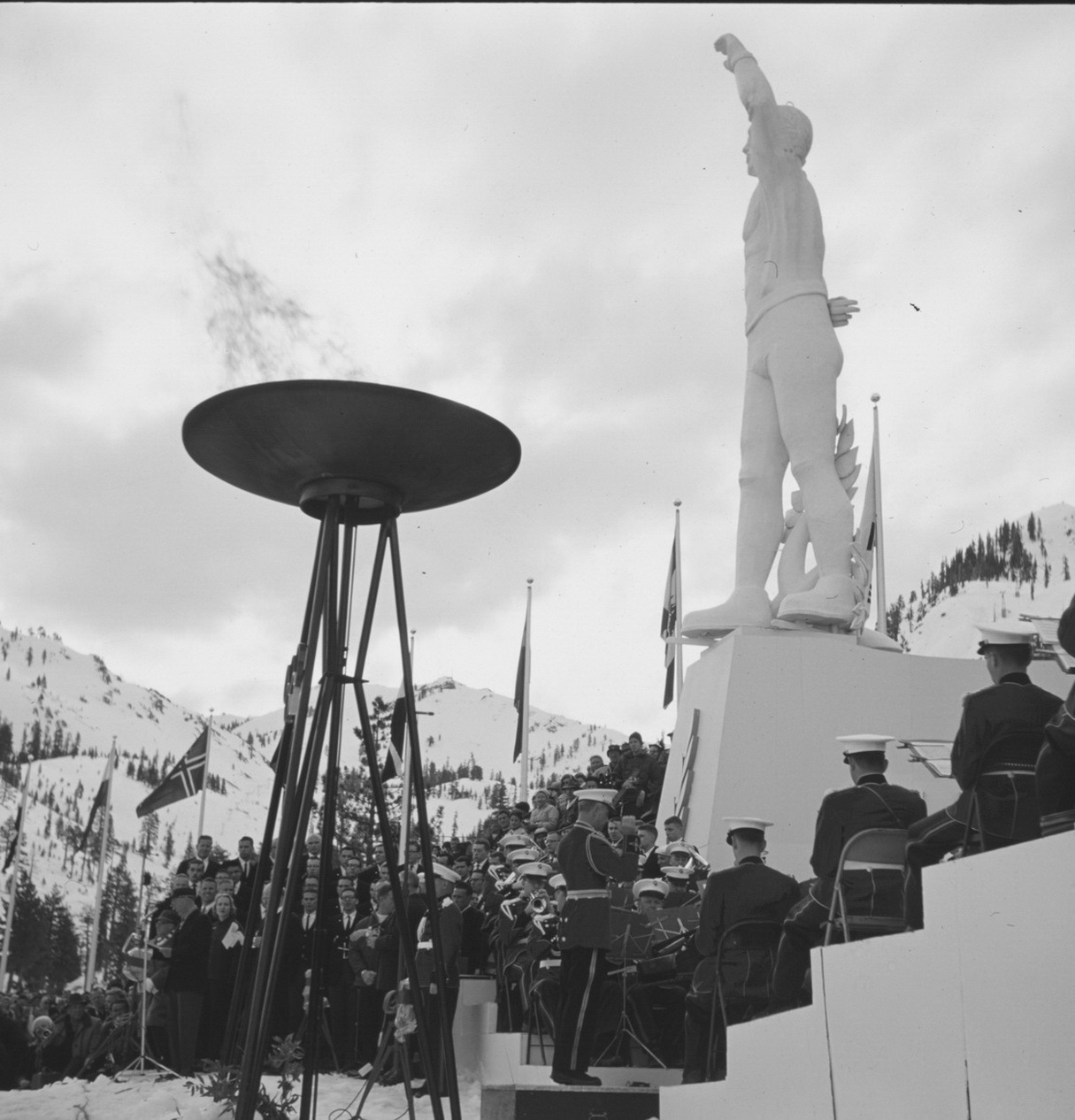 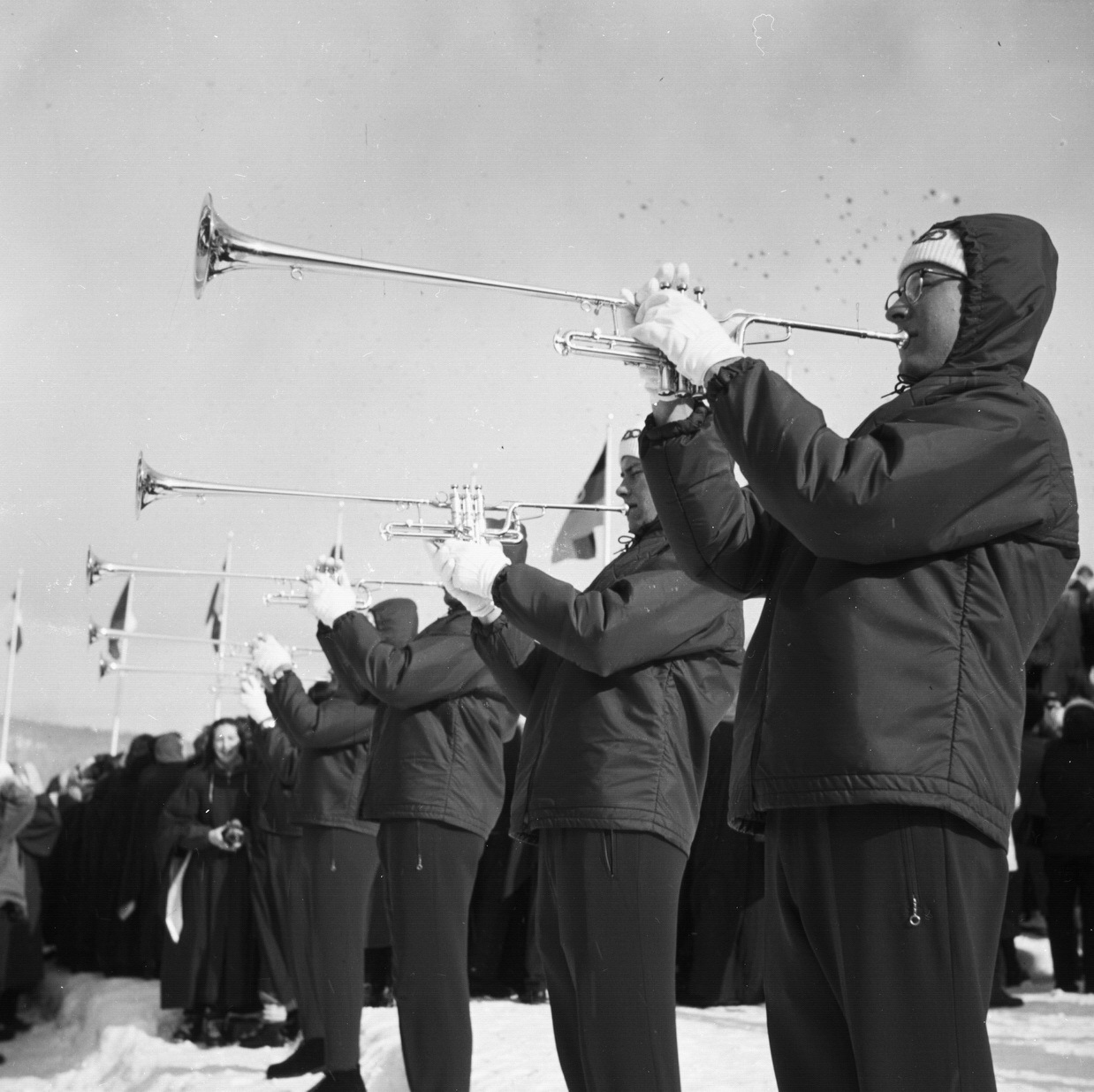 03 – The flags of the Nations rise in unison during the opening ceremonies. Photo by Bill Briner.

04 – Athletes and officials assemble in Blyth Arena for the opening ceremonies. Photo by Bill Briner.

Pageantry Chairman Walt Disney put his magical mark on the VIII Olympic Winter Games with the Tribune of Honor, the Avenue of Athletes, the opening and closing ceremonies and entertainment, and a firework shows. His program drew pride and excitement from host country residents, and ridicule and derision from European officials.

“Nothing is more important than creating lasting goodwill among our visitors, and we shall do everything we can to make their stay a happy one.” That was Disney announcing his plans for the opening gala at the Winter Games, which he envisioned as exciting and colorful, made-for-TV, and punctuated by music and thunderous sounds.

Ceremony, symbolism, and pageantry have long been complimentary elements to the Olympic movement’s themes of athleticism, balance in life, world peace, and equality. With California hosting the Winter Games, it was not surprising that the entertainment aspects of Hollywood would become an integral part of the production.

The fit with Disney was a perfect match. The creator of the Magic Kingdom was an avid skier and part owner of the Sugar Bowl Ski Area near Donner Summit. He later dreamed of building an innovative Disney-themed destination ski resort in the Southern Sierra near Sequoia National Park.

For the Olympics, Disney wanted an opening ceremony reminiscent of the Main Street parade at his Disneyland theme park in Southern California, with all the requisite elements: characters (athletes), stirring band music, and spectacular fireworks. His committee included Hollywood celebrity and skiing enthusiast Art Linkletter and a number of Disney’s own employees, including Disneyland live entertainment producer Tommy Walker and Disney Vice President Card Walker. Disney’s programming received some criticism from Europe, but American audiences saw the proposed opening ceremonies and entertainment as a high-profile celebration of the Olympic spirit and American pride.

Opening day dawned with a typically heavy Sierra snowstorm that clogged roads, delaying Vice President Richard M. Nixon’s arrival (and his declaration of the opening of the games) and postponing the opening ceremonies for one hour. Later dubbed “The Miracle of Squaw Valley,” the ceremony was staged both indoors and outdoors, with the bleachers of Blyth Arena swung open for the spectator crowd of 18,000 to view the speed skating oval and Tribune of Honor. After the initial postponement, the ferocious snowstorm suddenly retreated and the sun came out, shining brightly over the area for the next hour.

The Greek, American, VIII Winter Games and Olympic flags were fired into the air, where they unfurled and drifted down by parachute, ensuing the raising of flags of each of the 30 nations to the playing of “The Parade of Olympians.” Next up came the Olympian procession, grouped

by nation, into Blyth Arena. An assembly of 52 honor bands from California and Nevada high schools, the U.S. Marine Corps Band, and a 2,645-voice choir provided musical accompaniment.

Actor Karl Malden led the religious ceremony and the reading of the Olympic Prayer, while American figure skater and silver medalist Carol Heiss took the podium and recited the Olympic Oath on behalf of all Olympic athletes present.

The national anthem, “Star Spangled Banner,” was played as a Disney-inspired aerial fireworks show launched along with the firing and aerial unfurling of 100 VIII Olympic Winter Games flags over the crowd. As the nations exited the arena to the song “Parade of the Olympians,” a mass of 20,000 multicolored balloons rose into the clear blue sky.

One hour after the ceremonies began, the clouds closed back in, and heavy snowfall resumed, lending to the eventual nickname, “The Miracle of Squaw Valley.”

Nightly entertainment, presided over by TV Host Art Linkletter as master of ceremonies, took place in Olympic Village and featured prominent American singing and dancing talent Danny Kaye, an Old West motif, and a talent show for athletes. Victory award ceremonies, too, were designed by Disney, taking place at the end of each day to award medal recipients.

The closing ceremonies took place on February 28th, consigning the VIII Olympic Winter Games at Squaw Valley and Lake Tahoe to history and earning Disney the worldwide praise he deserved.