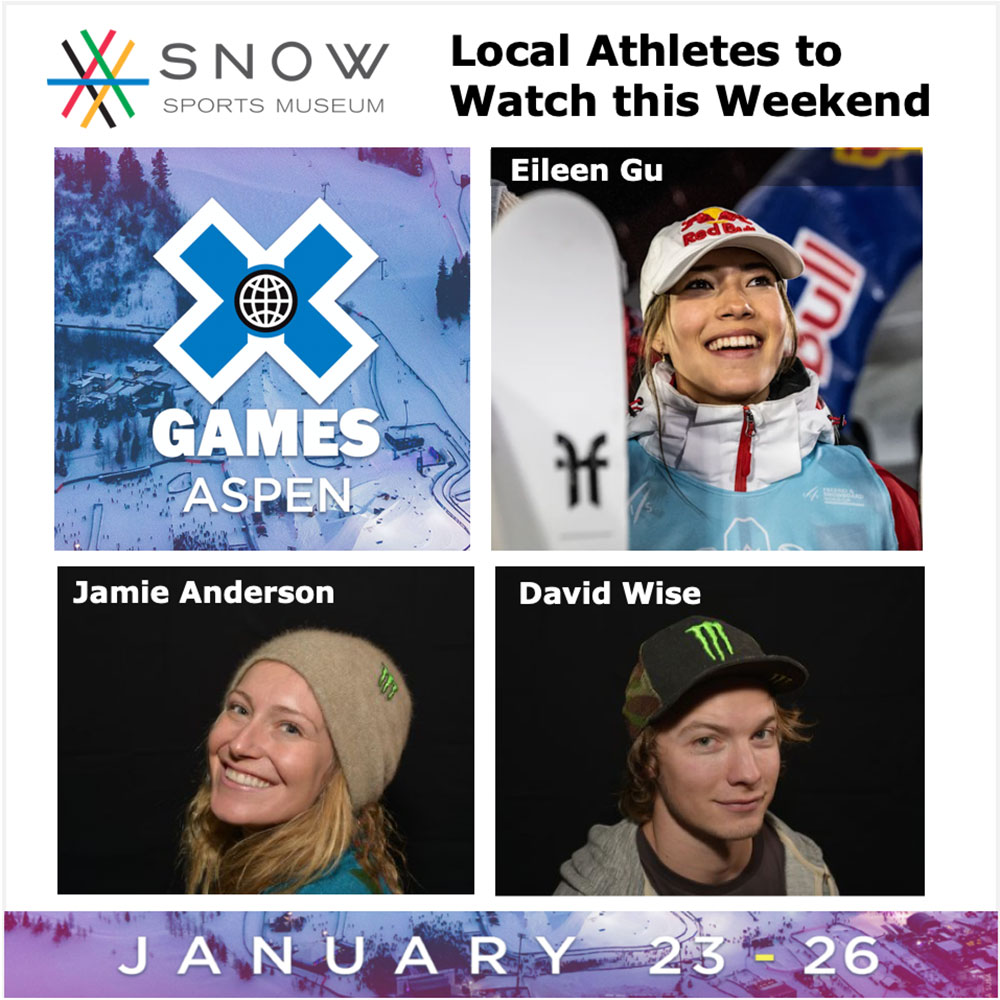 The SNOW Sports Museum recognizes and celebrates winter legends both past and present. Local alpine skiers Travis Ganong and Bryce Bennett have produced strong results in early FIS racing in Europe. But this week we turn our attention to the Snowboard and Freeski athletes competing at X Games Aspen 2021.

South Lake Tahoe snowboarder and SNOW Museum Ambassador Jamie Anderson is the most decorated woman in X Games history (17 medals) and one of the most accomplished overall. Her 6th Slopestyle gold at XG Aspen 2020 broke her tie with Shaun White and Mark McMorris for most Slopestyle gold. She knows what it takes to win, and she’s shown a willingness to push her boundaries. She promotes good vibes and personal enlightenment and is a role model for a generation of riders. In February 2020 she was named Female Rider of the Year at the inaugural Snowboarder Awards.

Reno-based skier and four-time X Games SuperPipe champ (Aspen 2012-2014, Aspen 2018), David Wise is also the 2014 and 2018 Olympic Winter Games gold medalist in halfpipe. A stylish rider with laser focus, Wise is known for pushing the envelope: In 2018, he was the first skier to land doubles in all four directions in the same run, which he did at X Games Aspen. Wise was nominated for two ESPYs after his epic 2018 season: Best Male Olympian and Best Male Action Sports Athlete (he won the latter). After missing the XG podium in 2020, Wise is hungry for redemption in 2021.

North Tahoe Skier and X Games Rookie Eileen Gu is definitely one to watch this weekend. She’s only 17-years-old, but this San Francisco native is a force to be reckoned with. She earned her first World Cup victory at the 2019 FIS Freeski World Cup slopestyle in Seiser Alm, Italy; and she took home the gold in Halfpipe and silver in Slopestyle at the 2020 Winter Youth Olympic Games in Lausanne, Switzerland. Eileen has been competing in North Tahoe since she was 9-years-old on the Northstar and Squawfree teams and is a source of inspiration for young skiers all over the world.